WEEK 4: WHAT MAKES ANIMAL CELLS DIFFERENT FROM PLANT CELLS?
LEARNING TASK 1: Identify the given organelles. Write your
answer on the space provided. 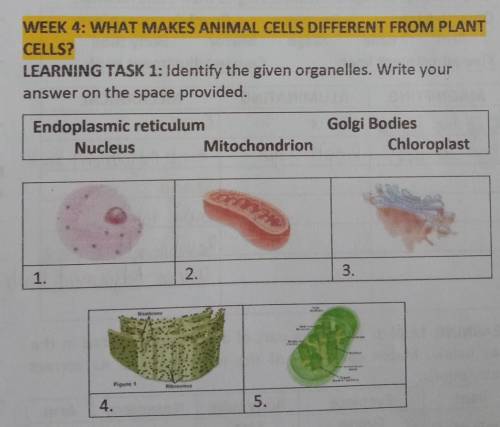 ☞ Identify the given organelles. Write your answer on the space provided.

Animal cells and plant cells share the common components of a nucleus, cytoplasm, mitochondria and a cell membrane. Plant cells have three extra components, a vacuole,chloroplast and a cell wall.

Both plant and animal cells are organisms, so they contain membrane-bound organelles like the nucleus and mitochondria.

Another question on Science

Science, 28.10.2019 23:29
What type is lion in an ecosystem
Answers: 2
Answer
You know the right answer?
WEEK 4: WHAT MAKES ANIMAL CELLS DIFFERENT FROM PLANT CELLS?
LEARNING TASK 1: Identify the give...
Questions

Physical Education, 04.07.2022 07:25
PRACTICE TASK 2 Social dance mixer is one of the activities that will get people a feet, have fun, meet other people, create a comfortable atmospher m...

Technology and Home Economics, 04.07.2022 07:25
drying or dehydrating'food is a method of food preservation that removes enough moisture from the food true or false...

English, 04.07.2022 07:25
What is the difference between qualitative and quantitative research? Include mention of possible differences in purpose, method, data sources, and...

Technology and Home Economics, 04.07.2022 07:25
Direction: Fill in the blanks of the correct answer.. 1. In presenting food on platemust be an uncut portion of the main food items.2. Lightly...